With the release of the AutoCAD® Plant3D and P&ID 2017.1 update, and the new 2018 version just released, came a new feature which enables P&ID to utilize and reference the Plant 3D Specifications for each project. The purpose of the Spec Driven Project on the P&ID side is not to restrict the user but rather inform the user from the Plant 3D Spec itself when components are found (in spec) or not found (off spec). In other words, if using the out-of-the-box Plant 3D CS150 Spec on your P&ID and you added a 30” Primary Line Segment with a 30” Gate Valve, the Gate Valve would be “In Spec” because the Spec includes a 30” Gate Valve, but the Pipe itself would be “Off Spec” because the Spec does not include Pipe larger than 24”.  Depending on the settings at the time, you would be alerted to this while drawing or verifying the P&ID and would know to either update his Specs to include the larger diameter pipe or modify the P&ID to match the Spec.

In order to use this feature and utilize the Plant 3D pipe specs you will need to configure your project as a Spec Driven Project. Existing projects and new projects not based on a Project.xml that has already been configured will continue to operate without any connection to Plant 3D pipe specs, which is now known as a Standard Project. You make this choice In the Project Settings under P&ID DWG Settings > Pipe Specs in P&ID. 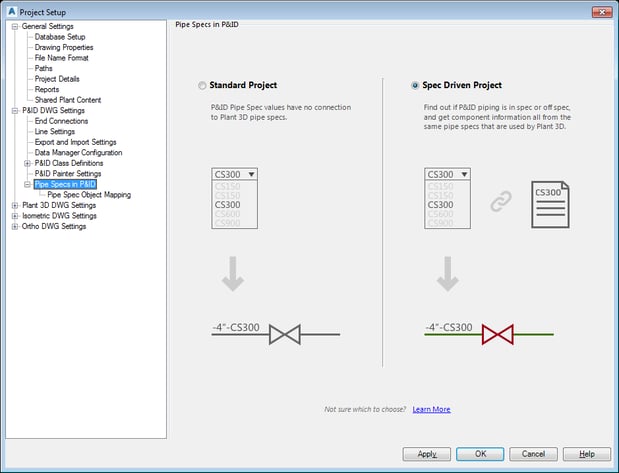 Once configured as a Spec Driven Project, you can fine tune the configuration under Pipe Spec Object Mapping. Here you can map P&ID objects to Pipe Spec objects as well as properties between the two. P&ID objects are divided into four categories, or tabs, signified by a component icon: 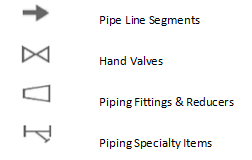 Looking further at the Needle Valve, it has been mapped to three possible Spec Objects:

You can map an object to as many objects as necessary. While the Needle Valve above was mapped to three different objects, the Gate Valve is only mapped to the Gate-Inline. Yet the Angle Valve is mapped to fourteen different types of angle valves.

Switching to the Property Mapping tab the Needle Valve is set to Acquire all of the Properties from the Pipe Spec but only the Code, End Connections, Manufacturer, Status and Valve Code have actually been set out-of-the-box. You can select the P&ID object and override these settings and then set them to Update from the Spec, if necessary, but I prefer to use all of the default settings myself. 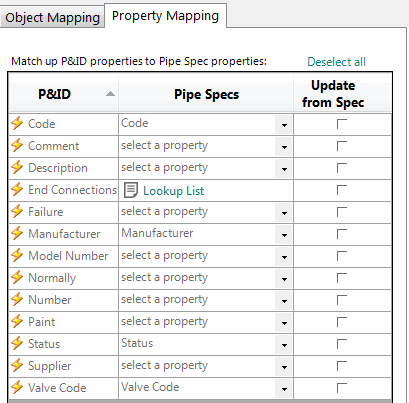 Components that have not been mapped, such as the aforementioned pinch valve, will simply be ignored during verification with the pipe spec. 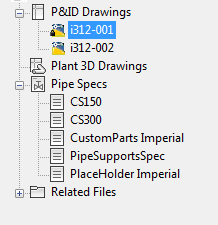 Exiting the Project Setup there are a couple of changes to the user interface with Plant 3D as a result of this feature. In the Project Manager there is a new section for Pipe Specs where all of the Plant 3D Specs within the current project are listed. By right clicking on a pipe spec you can:

Set as Current Spec will allow you to draw in P&ID using the current spec as your default. This can best be seen in the Ribbon menu where you will notice another change to the user interface.

On the Schematic Line panel there is now a drop down to set the size and the spec of the line that you are drawing. It is very similar to the method used to Route Pipe in Plant 3D. The spec is set to the current spec in the Project Manager but you can use the drop down to change to any other Plant 3D specification as well as Off Spec specifications from the P&ID Spec List that has been available in the past. The Off Spec items in the list display with a background hatching as a visual alert to remind you that these are not part of the Plant 3D Pipe Spec but are still available for use in case you need to add a specification to Plant 3D at a later time.

Similarly, the size shows every size of pipe available in the spec that has been activated. Under the Off Spec section with background hatching are all the sizes in the P&ID Size List that are available. You can draw using either a size or spec that has the background hatch but these will be marked Off spec when verifying. This is not to restrict you from using these items but to alert you that you will need to add these to the Plant 3D Pipe Specs in order to model these pipe lines.

Even if you are not using Spec Driven P&ID’s, these drop downs are now available for your convenience. Just without the In Spec and Off Spec background hatching.

The next change you might notice is on your tool palettes. With my ribbon settings set to 16” CS150 as they are above, my valves have a mixture of images with and without background hatching. The images without the background hatch are telling me that I have a 16” gate valve, check valve, etc. in my CS150 Pipe Spec but I do not have a 16” needle valve or an angle valve in the same pipe spec. I can place the needle valve in my P&ID but this component will be Off Spec. If I change to a 1” pipe size both the plug valve and butterfly valve will turn to the background hatch because neither of those sizes are available in the out-of-the-box CS150 Pipe Spec.

This background hatch on the tool palettes will hold true for all of the categories discussed earlier in the Project Settings: Pipe Line Segments, Hand Valves, Pipe Fittings & Reducers, and Piping Specialty Items. This gives you an idea of items that may need to be added to your spec before you even place the components.

However, this can be a bit deceiving for two reasons. If you don’t change the size and spec on the ribbon menu and use the “Assign Tag” function to manage the pipe lines you’ll never see the background hatch correctly. In those instances you must rely on other methods which we will discuss in a moment. The second reason it’s a bit deceiving is because if an item is not mapped in the Project Settings it will not ever have a background hatch. For instance, I know that the out-of-the-box CS150 pipe spec  does not have any 60” valves, yet when I change to a pipe size of 60” all my valves have a background hatch save for the pinch, knife and rotary valves as seen in this image. 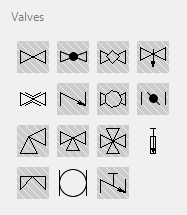 If you remember earlier in the Project Settings I pointed out that the pinch valve was displayed in grey text because it had not been mapped. The same is true for the knife and rotary valves. Since they have not been mapped, the spec verification ignores these components and treats them no different than it would equipment, instrumentation or other components that are not in your specifications.

In addition to the tool palettes, the background hatch is utilized with part substitution when parts are out of spec.

Another difference can be seen when you use Assign Tag on a pipe line segment even if the size was unassigned or even if you are not using a Spec Driven Project. The Spec holds a default giving you one less field to fill out on new lines and on branches that are part of the same sline group the spec carries over just like the Service and the Line Number.

If I set the default size on the ribbon I would only need to change assign the tag when something actually changes. This makes P&ID feel much more like Plant 3D than anything else we’ve talked about.

The easiest way to see if components are In Spec or Off Spec is to use the P&ID Painter. After changing to a Spec Driven Project the software automatically creates a new Painter Style named Off Spec Piping. Below are the default settings for the Off Spec Painter Style in the Project Settings. I am making one change to these settings for the article and will use Blue for the In Spec piping so that it can be easier to see on a white background.

To use this feature, on the Home tab of the P&ID Ribbon Menu you will see a panel named P&ID Painter. Simply activate the Paint P&ID tool and set the drop down to Off Spec Piping. Everything that is In Spec will appear in Yellow, or in my case Blue, and everything that is Off Spec will appear in Red. If the component has not been mapped or if it is not one of the four categories we have talked about, it remains in the color of the layer that is being used for that component.

In the example in the image below and ignoring the pinch valves for now, where I am using the out-of-the-box CS150 Spec, all of the 1/8” piping and components are red because there are not any 1/8” piping or valves in the spec. The 16” line is blue because that one is in the spec and while the 30” pipe is out of spec the 30” valves are in the spec. The pinch valves are cyan on all three lines because they are still not mapped and cyan is the color of the Mechanical layer. This enables the user to verify his P&ID with the Plant 3D Pipe Spec LIVE! as he draws.

The final method for reviewing what is In Spec and what is Off Spec is using the Data Manager. A new drop down filter has been added to the Data Manager palette where you can select In Spec Piping only or Off Spec Piping only. In the images below I limited the view to the Hand Valves node viewing the same valves in the image above. Once again, the Pinch Valves are filtered out since they are not mapped. 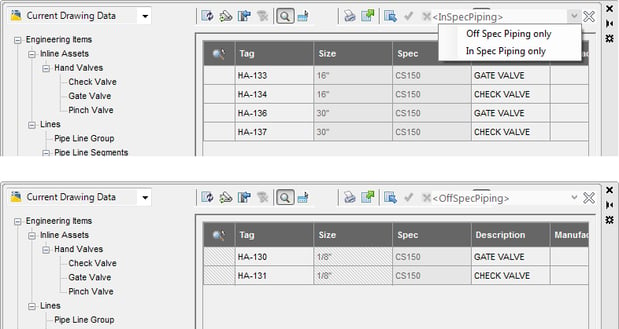 One last detail regarding the Spec Driven P&ID’s. When you place an item with only one option for in the spec, the Spec Part is automatically assigned that one option.  However, when there are multiple options in the spec as with the gate valves in the out-of-the-box CS150 Spec, you can use the properties Palette to select the exact component you want to assign to this symbol. In the example below the Spec Part defaulted to the first gate valve it found in the spec which was the Double Disc BW, but I am going to change it to the Double Disc RF Flanged Gate Valve.

While setting this does not affect Validation between P&ID and Plant 3D and it does not change the valve it uses when placing the valve from a P&ID Line List in Plant 3D, it does help you maintain correct data on both sides of the software and hopefully it is a step toward correct validation and line lists in the future of the software. I have already added this to the Autodesk Ideas Page for Plant 3D so be sure to vote this up if you want to see it in the future.

Also, since P&ID’s are not drawn to scale or contain any type of real world layout, Pipe Line Segments are only verified against the pipe component  in the pipe spec for that size. It does not check for elbows, tees, flanges, etc. in the pipe spec.

Next month we will tackle adding the Pinch, Knife and Rotary Valves to both the P&ID Pipe Spec Object Mapping and the Plant 3D P&ID Object Mapping.