If you’re a consistent user of Autodesk Inventor you’ve probably at least heard of iLogic. Maybe you think of it as “that programming thing that I don’t have time to get into and probably don’t need”. Maybe you’ve dabbled in it, or copied some rules from the Autodesk Inventor Customization Forum to save a few clicks or solve a problem. Maybe you’ve even created some complex rules to drive configurable parts and assemblies. Regardless, it’s important to have a good understanding of the tool – what it is, what it isn’t, and where it fits in the overall scheme of Inventor’s Design Automation toolset.

iLogic is a toolset for Autodesk Inventor that allows you to add an additional layer of intelligence to designs. We can already incorporate a significant amount of intelligence via parameters and equations, but iLogic takes this a step further. Through the creation of rules, we can have our parts and assemblies update in complex ways based on changes to parameters. These rules are largely based on Visual Basic syntax and can contain conditional statements, for example an If/Then statement:

This is powerful because it’s not always possible to create the necessary relationships between our parameters with equations alone. In addition, we can trigger an automatic update of a whole host of parameters, feature/component suppression and iProperty values based on a variety of actions:

iLogic is also very easy to use. It simplifies what might otherwise be complex Inventor API interactions via its own functions, and provides quick access to those functions when writing rules via snippets. 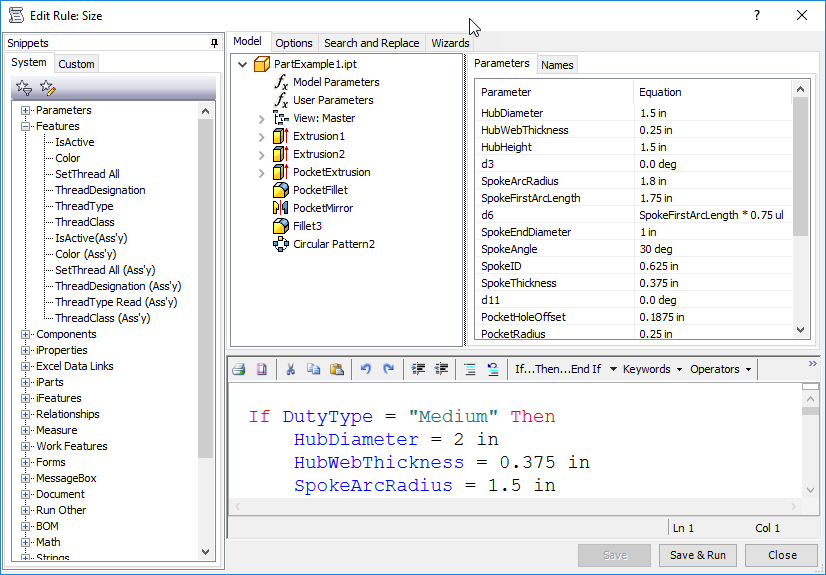 Finally, iLogic gives us a window into the Inventor API that does not require the creation of a custom add-in or the use of VBA. iLogic rules can be very complex: for example, a rule that relies solely on the Inventor API to delete extra, unused appearances from an Inventor model:

iLogic is a powerful tool, but it’s not omnipotent. While it’s possible to create basic forms with iLogic, you cannot modify the Inventor User Interface. For example, you cannot add ribbon tabs, panels, or buttons that execute commands. iLogic is technically an Inventor add-in, and add-ins can only modify the user interface as they’re loaded.

iLogic is also not well suited for creating parts, assemblies, or drawings from scratch. You’ll notice there are no snippets or iLogic functions for any of the following actions:

Where does iLogic Fit?

iLogic is very powerful, but it can’t do everything. So where does it fit with the other methods we have to automate Inventor? I consider it the second most capable behind direct manipulation of the Inventor API. Here’s how I view the hierarchy:

Using parameters and equations is typically the first step in automating an Inventor model, and many users never move beyond that point. Some users branch out into iParts and iAssemblies, though that functionality has its own benefits and drawbacks.

If you’re comfortable with and actively using the more ‘traditional’ methods of automating Inventor, you should take a close look at iLogic and how it can expand your capabilities. iLogic can often expand upon your existing automation efforts and fill in the gaps where you couldn’t quite make the other methods work.

How Do I Get Started?

There is a wealth of information about iLogic available online. Searching for ‘Inventor iLogic’ on YouTube provides literally thousands of results. In addition, the Autodesk Inventor Customization Forum is a great place to ask questions if you get stuck.

If you’re looking for something more structured, Hagerman & Company offers both standard and custom iLogic training classes as well as consulting services to help you integrate iLogic into your workflows. Whether you just need to be pointed in the right direction or a complete turnkey automation solution, we’re here to help.